The Coolest Thing That I Have Picked

We went picking yesterday.  This is a tough time to pick here on the tundra because it is cold and snowy.  But we had a lead so we headed north.  A couple of weeks ago we had left a brochure with a guy.  He didn't have anything but that he would give it to his dad who had stuff.  Well, dad called and we were off to see his stuff.

Dad was about 8o years old,  He had worked for the railroad and his dad had been a superintendent for the railroad.  We strolled through the house negotiated and bought a number of items.  Searched the basement and bought some more.  Some railroad books, 2 caboose lanterns, a couple of signal lights, a huge 1880's blue transferware platter, an Oriental rug were put on the list.  We went outside to the shed and bought a few other items.  Then dad said there is something in the garage that you may want to see.

In the middle of the garage on the floor sat an intact locomotive headlight complete with the three glass engine number plaques.  Apparently he wasn't going to show us the headlight unless we passed the earlier tests in the house and shed.  Well we passed.

The headlight was from a steam locomotive.  It was a Mallet Yellowstone Locomotive built by Baldwin for the Duluth, Missabi & Iron Range Railway in 1943.  It was one of 8 Yellowstones that were the largest steam locomotives at that time and used to haul war essential iron ore from the iron ranges to Duluth and shipment to Pittsburgh.

We have never seen a fully dressed locomotive headlamp that was for sale.  We negotiated, we bargained, we feinted and we joked.  We bought the headlamp.  It is the coolest thing that we've found in the 2 years that I've been picking. 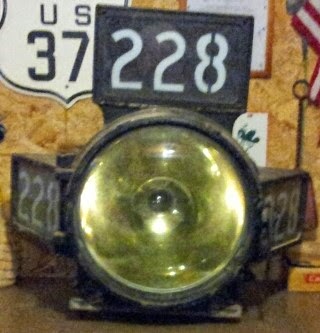 After the sale dad called one of his friends.  We visited Don and filled the truck with the picks from his garage.  We also made a date to visit again after New Years to scour more stuff from Don's stash.

All in all it was an excellent day for picking here on the tundra.