I have been contemplating constructing a Steampunk decorative light since I saw some on Steampunk websites. I have plans for much more elaborate lights with rheostats, red warning lights and multiple switches. Here is my first prototype light. I used an oak card file box and some porcelain fixtures that I bought in a box of electrical stuff at an auction. The tube like bulbs are used in desk lamps and display cabinets, but offer an old time tube type look. 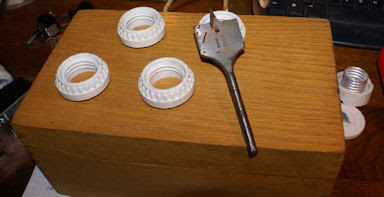 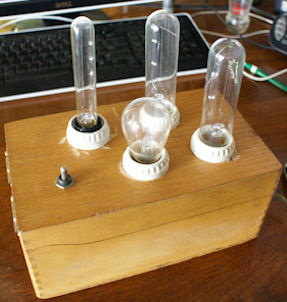 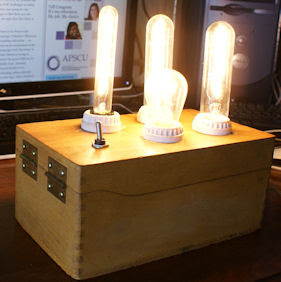 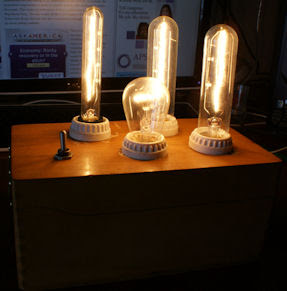 I think that I will stain the box a dark color and fill the gouges that using the wrong hole bit caused. What do you think? Am I on to something that someone else would want to decorate with?

Here's What I Did This Morning

I spent most of this beautiful morning working on getting things ready for the October sale at Gypsy Lea's. I cleaned, I sanded, damn, I even shellacked. The heavy wood steel wheel cart was my first project. I will reassemble the pieces later after the amber shellac dries. 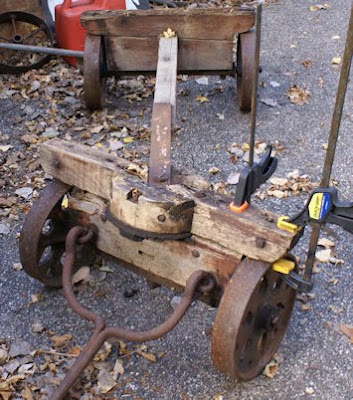 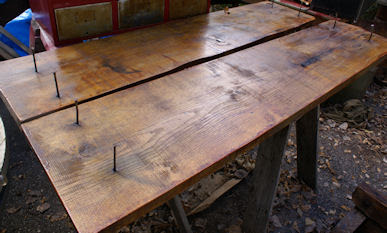 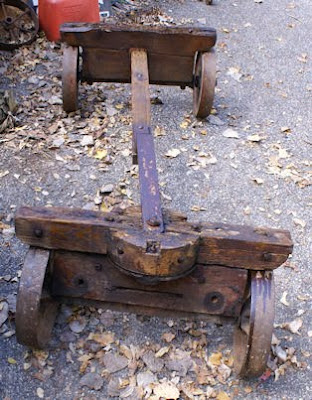 Then I jumped on the green parts bin. I went through a quart and one-half of shellac and didn't even finish the case. I need to make a trip to town to pick up some more shellac. 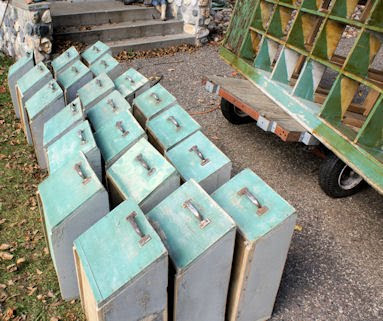 These are a few of the pieces that I bought at auction last Thursday. The red corner cupboard is interesting, but I really like the PERU metal trunk. 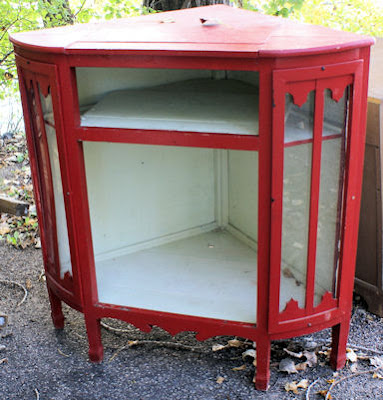 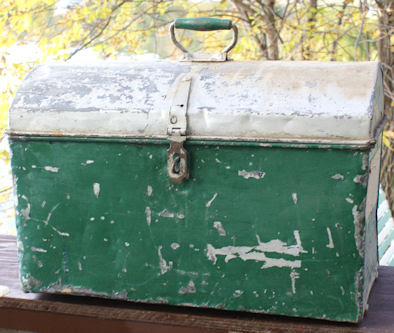 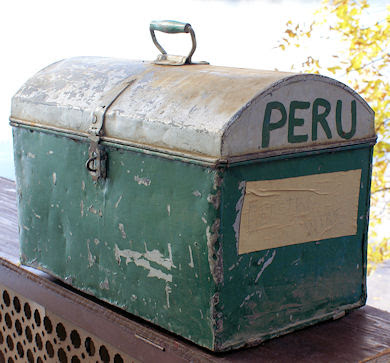 I think that this Model T wheel, painted red, green and yellow, can be modified into a Christmas Tree holder for an artificial tree. 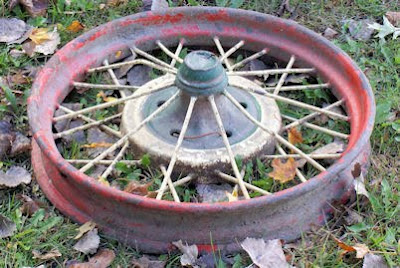 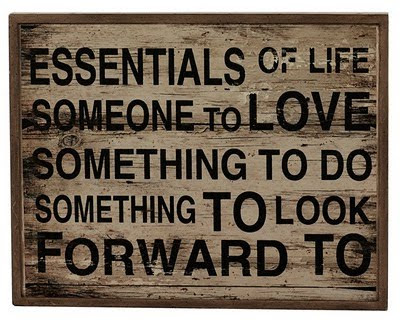 Splish-Splashing Away at an Auction

You may have heard that we've had a little rain here on the tundra. No problem for my house or anything around Flannery Bay, but there has been some flooding and wash outs elsewhere. And it did rain. It rained hard for a couple of hours, then broke for a half hour and then another couple of hour wave hit. I couldn't work on painting my bin cupboard or staining my cart coffee table, so I went to an auction.

The auction was surprisingly well attended for the weather. I got there, as is my normal style, about an hour after the auction started. It was a household retirement and move to Texas before the next winter auction. Nothing truly surprising or delightful, but a bunch of stuff "with potential". (Much like that D student in 3rd grade who you are trying to motivate).

Last week I studied the new Restoration Hardware Catalog. It has a great Industrial, bordering on Steampunk, look. It has been very inspirational for my inventory at Gypsy Lea's the next few months. So I was especially attune to finding some industrial type fittings at auction.

First I bought 2 medium size iron and wood pulleys. They have big hooks, wood wheels and a hinged latch that can be opened to set in the rope (instead of threading it through for the entire length). They will end up as hangers for a ceiling lamp or maybe a pot rack.

The 3rd and 4th waves of rain hit the auction while I was there. The grass between the racks was turned to an oatmeal like texture quagmire. People were grasping the shoulder of the guy next to them to keep for sliding down the muddy slope. And then it rained some more. The auctioneers split into two rings to speed up. The crowd melted away and the split made it even smaller. That's when the bargains started.

I bought a small metal humpback trunk, a painted wood shipping box, two old flat top trunks, a red painted corner cabinet, 2 bookcases, a weird cupboard, a 1970's bar/dry sink and a great wooden homemade carpenter's box. Now it was dark and muddy when the auction ended and the garage where my furniture was sitting was blocked by two of the rack trailers. So I decided to stack everything in the garage and return during daylight to load my treasures. The clouds are supposed to part soon, so I'll attach my trailer and return to the auction site this afternoon.

I'll have pictures later of these many treasures.

eBay in Recovery - Not So Much!

The economic eggheads at Harvard and other elite North Eastern institutions are saying that the recession ended in July 2009 and we have been in recovery since that time. Would someone please convey that information to the buyers on eBay.

I noted earlier that I was going to make another attempt at eBay sales right after Labor Day. I listed 10 items, three sold. And one item even had more than a single bid. eBay still sucks and my sales reflect that situation. I did sell a genealogy book for $25. It was in a lot of 5 boxes of books that I bought at an auction for $2.50. I sold another set of genealogy books out of the lot for $150 earlier, so I am at $175 gross on that purchase. That's a very nice return on my investment, especially when I bought the lot for a different book, but should be repeated with other good items on eBay. Not so much I guess.

I'll probably try a few more items on eBay near the end of the month. Maybe some city or county histories, which seem to fill in the genealogy theme. Otherwise eBay will mostly remain a memory of past good times for me.

Another Crash - Another Service Call - Damn I Hate Computers

I have been absent from the Net for the past week or so. My new super souped up DELL has crashed again. Windows 7 has corrupted, while I was using it, and everything froze. I called, the first service tech was some unintelligible woman in the Philippines. NOTHING and we were finally disconnected. Ain't that a surprise. Then someone from Omaha called. Omaha was the caller ID, but I never heard of the Nebraska monsoons. We tried this and that and finally they were going to send me new Windows re-install disk. BAHHHHH!

Well the disk arrived yesterday afternoon. It made no difference. So now we are going to have a technician arrive in 3-4 days to install a new hard drive and a new RAM.

I reconnected my old computer. I am trying to find my new links etc. Maybe my new computer will finally work, but I'm not holding my breath.

Back on eBay for a Trial

I started selling on eBay in 1997, when total listings on the site were about 400,000 items. I have sold things on eBay, off and on for the past 13 years. The changes to eBay, mostly made by the brain trust that succeeded Meg Whitman, made selling in the auction format less desirable and much less profitable. The continued economic problems has also decreased sales on eBay. (When you can't pay your mortgage you aren't looking for my kind of junk as a whim). I listed a few items during the past year, but sales were marginal and not worth the effort.

I like to list paper items. Mostly postcards, but books, manuals and other ephemera were my items of choice. I also often listed pottery, mostly because I know a lot about pottery and I am often able to find pieces at auction for a good price. Most of the postcards that I sold were city views. Something like a real photo of main street from Decorah Iowa from 1909. These almost always sold and often sold well. (A pair of postcards of main street in Watson Alberta sold for $134). I listed some city views earlier this summer and no bids. Nothing. I listed some souvenir glassware (which also was usually a good seller) only one item sold and it only had one bid.

Yesterday I listed 9 items on eBay. Some souvenirs, a book, a piece of Scandinavian pottery and a great advertising piece. Now we'll see if there are any buyers still on eBay. Wish me LUCK.

I got the parts bin and steel wheeled cart out of the truck, without damage to the pieces, the truck or me. I used the 4 wheeler with a nylon strap to extract the pieces slowly from the truck. I pulled them out, supporting them with the strap under the end and softly dropped them on my little garden trailer (with the sides removed). The bin is not too heavy with the drawers removed. There are decades of accumulated dust all over the piece so I took my leaf blower out and blew everything that would move. 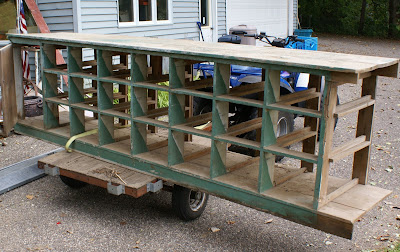 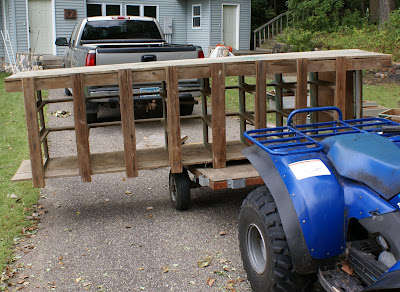 Next I get to pressure wash the entire piece. I have to build some sides for the piece. I am going to use some barn wood that is nicely grayed for the sides. It isn't the mellow green on the face but it will match the stripped places and the top.

I'm off to apply some pressure. (Wash that is).

These are Great Pieces

Its been a long time since I posted to this blog. I'm sorry for my absence. I've been in the doldrums of real work, lack of energy and lack of imagination. I attended a very interesting auction today. The weather was beautiful, 72*, mostly sunny with a breeze and puffy white clouds floating by. The auction took 10 hours (counting my 1 hour travel time, each way). Most of the prices were higher than retail. But I bought the two pieces that I saw in the bill and made me want to attend. 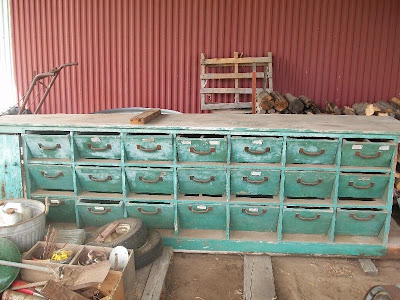 The first is this wonderful green parts bin. I will need to fill in the ends and maybe put a back on the piece, but it is great. 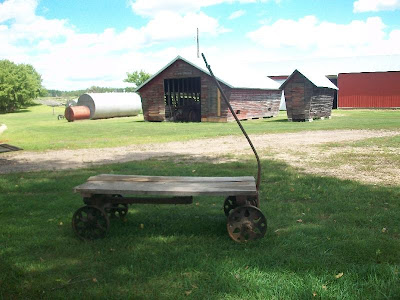 The second is this wonderful steel wheel cart. I will pressure wash the cart, sand and poly the top and remove the handle. It is going to make a wonderful coffee table.

As usual both these items are very heavy. It took four guys to load the bin and 3 to get the cart on the truck. Now we'll see how I get them off all by myself. I will work on them tomorrow. They will be beautiful pieces for the shop.