A coffee table that I repurposed at Second Hand Rose this month.

Its time for the monthly four day market at Second Hand Rose in Buffalo, Minnesota again next weekend.  It was hot and humid today getting my pieces into place on Sunday.  There's a new wrinkle for this market too.  I actually assembled a repurposed piece of furniture from items that I have gathered over the past few months.

The rest of my set up involves 4 very large white chippy paint porch posts.  I measured one while it was laying in the truck.  It was going to fit by about one inch.  I hoisted the 100 pound monster into the shop and gingerly slid it into place with about an inch to spare.  I hauled the other three posts into the shop and then tried to set them up.  It seems that the other three posts are about 4 inches taller than the post that I measured and barely fit.  I think that Mr. Murphy was overseeing this entire transaction.  The posts would not fit.  So instead of standing stately on each side of my center vignette, I had to stack them at an angle forming a V on the back wall of my space. 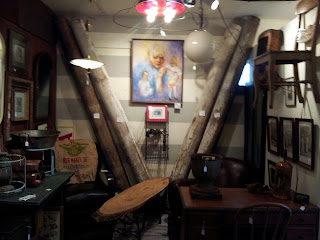 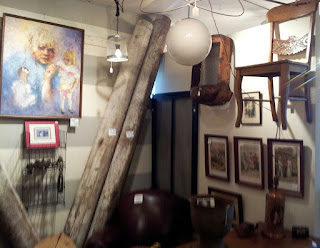 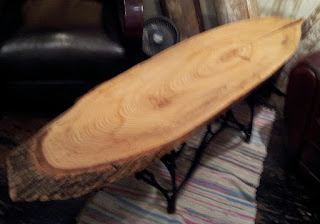 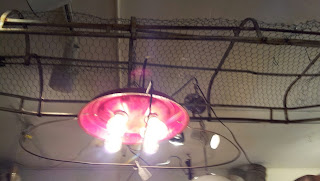 It's going to be a great market in Buffalo this month.

A Brush with Alien Technology

Yesterday was the monsoon auction.  The temperatures here on the tundra have been death defyingly hot and humid.  High 90*s with at least 120% humidity.  The cold front, if you can call it that, roared through here with huge rains, hail, high winds and a couple of tornadoes.  So instead of setting up at the flea market I decided to go to an auction.

The auctioneer suspended selling twice for more than 45 minutes each time.  When the civil defense sirens in the nearby town sounded, the auctioneer decided that everyone was on their own and seeking shelter might be a good idea.  We had over 5 inches of rain in about 3 hours.  The field for parking vehicles was swamped and churned to mud by cars trying to escape.  My umbrella inverted in the wind and was then abandoned.  On the first break I went to the local thrift and bought a $3 replacement.  It didn't really help.  By the time the auction was over I was soaked and caked with mud.

Was it worth it?  Probably not.  But then again I don't have a real life, so the excitement and challenge was invigorating.  I bought a few pieces, a great flood light, a couple of 1950's hood ornaments and some chairs.  However the most interesting piece was this Allen automobile testing machine that I hauled home on the small trailer that I bought.

When I first saw the machine through my rain splattered glasses I thought it was marked "Alien" rather than "Allen".  Here was my chance to grab my own piece of alien technology and perhaps an appearance on the History Channel.  It was somewhat deflating to read Allen when I got closer. 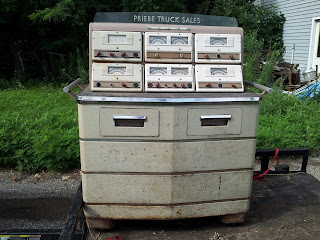 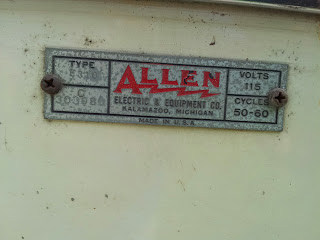 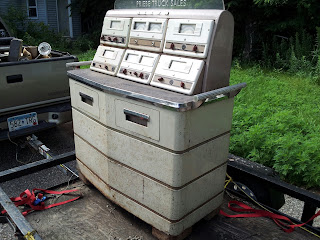 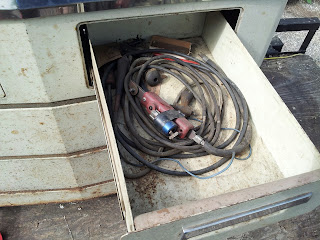 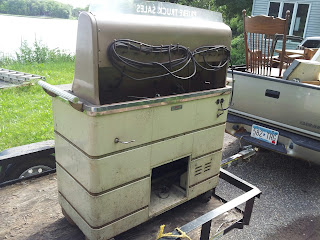 My initial idea was to detach the top, replace the top of the cart and turn it into a nice art deco kitchen cart.  However I was told that these kind of machines are being restored by the vintage car guys who are then adding them to their vintage garage.  I have some research to do, but I may try to sell it as is.

Another adventure in life on the tundra brought to you by,

Stacking it Higher and Deeper

I had a very busy end of the week.  Real work in St. Paul on Thursday and Friday.  Then a power trip during Friday rush hour from St. Paul to St. Cloud to pick up two leather chairs at Dave Miller's auction house.  Loaded the truck and then headed for Second Hand Rose in Buffalo.  Reset my space at SHR.  Saturday it was on to a farm estate auction and another full pick-up.  Sunday was work day at SHR and another shuffling of goods into the shop.

The Saturday auction was the most interesting.  They had hay rack after hay rack of smalls ready to sell, 7 racks total.  It seemed that everything that I wanted to bid on was the 6th box added to the 5 boxes that hadn't sold.  I would get 5-6 boxes along with the one item that I sought.  I bought everything from metal shooting targets to vintage x-ray machines.  The auction took 6 hours and then  I started sorting.

I refused to haul home all the trash in the first 5 boxes, but I couldn't just ditch them without looking.  I sorted through the mound of stuff that had accumulated next to my bidding position.  I left much more than I loaded into the truck.  I strapped and strapped again.  I bungeed and bungeed some more.


Today I have to unload the truck, process the red chairs and then head for an auction.

Lights Out on the Tundra

Its been an interesting 24 hours here on the tundra.  Big winds, hail, heavy rain and a couple of scattered tornadoes visited our section of the USA.  Our power went out at 4:45 PM Tuesday. Eventually I called customer service, with a 2 pressed here and a 10 digit number clearly enunciated there I finally got to a recording that stated power should be restored by 11:00 PM.  A call at 11:30 PM pushed the recorded restoration time to 6:00 AM.

Now I live out in the country with a well and a septic system.  I also have a sump in the basement needed to remove some of the 2.5" of rain that will be gradually filtering into the sump pit.  No power means no water, no sewer (because the waste has to be pumped to the drain field at the top of the 75' bank) and no sump.

We made it through the night without flushing or watering but the kitties' water bowl was close to dry.  (Babe just sauntered to the lake and drank his fill).  So at 8:30 AM I called again and it was now 10:00 AM to restoration.  I called at 11:00 and the new time was 11:00 PM.  I called again at 4:00 PM and a actual person answered the phone.  Of course she was of no more help than the useless recorded message.  After explaining that there had been big winds and lots of trees down she said they hoped to have all power returned by 6:00 PM TOMORROW.

I got home at about 5:00 PM and the power was restored.  The sump was sumping, the refrigerators were refrigerating and the waters were flowing.  Just more proof that Wright-Hennepin Cooperative Electric Co. has no idea what or when it is doing.

Adventures in electricity for,

Its time for the monthly 4 day market at Second Hand Rose in Buffalo, Minnesota.  I finished up my space on Sunday morning.  It was the first set up in a long time that was ready to go easily.


Here's hoping for a good market at SHR.

It was a less than average Thursday auction at one of my favorite auction houses, Dave Miller's in St. Cloud.  I went to the auction to look at a pair of leather chairs that were online in the auction bill.  I looked at the chairs, they were right and just what I expected.  There were a couple of other pieces of furniture that were interesting and a couple of smalls that would work if they sold for the right price.

I sat around waiting for the leather chairs and even bought a couple of small pieces to make sure that my bidding arm was working properly.  Dave got to the furniture at about 7:30 PM and started down the line getting better prices than I would pay for most items.  At the end of the first line he came to a game table with 4 pressedback chairs.  I had looked at the set but didn't do a hard examination because I wasn't too interested.  The chairs were solid and the table didn't rock.  Bidding started low and moved very slowly, stalling at $65.  I thought that was a very cheap price for 4 chairs and a game table so I threw in a $70 bid.  No further bids so the set was mine.

The bidding moved on to other items and eventually to the leather chairs.  My friend Sam had come to the auction to look at the chairs too, but deferred to me on the purchase.  I got the chairs and then had them put one on Sam's bidding number.  I next bought a custom made black walnut Danish modern style desk.  The desk is beautiful and I'm pretty sure that I didn't pay enough to reproduce even one drawer. 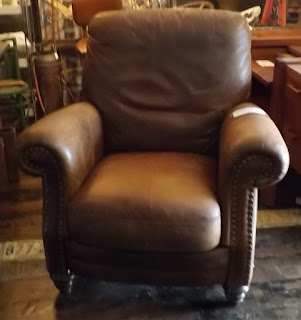 We loaded the truck in the dark and I didn't examine anything other than getting the straps in the right places to keep the entire load on the truck all the way home.  The next morning I decided to bring the load to Second Hand Rose for the July market.  I unstrapped the load and started hauling things into my space.  I then took my first good look at the pressed design on the back of the chair.  There looking me right in the eye because of the angle that the chair being carried was a clear pressed "JUNG" 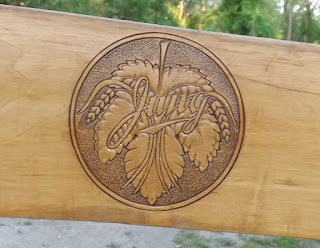 I got very interested.  I knew that Jung was an old time brewery in Milwaukee and I had seen saloon chairs marked with the logo of other breweries.  I also knew that game tables with pockets under the tabletop where often used in bars.  (I have a game table from a bar in Alma Wisconsin in my house). 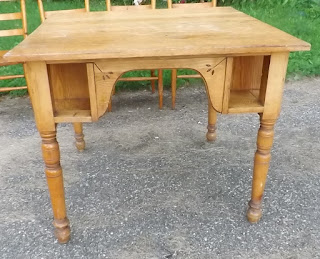 I reloaded the table and chairs into my truck, leaving the leather chair and the walnut desk at Second Hand Rose.  It was time for some research concerning brewery furniture.

Jung Brewery was in Milwaukee between 1896 and the start of Prohibition in 1920.

“Many breweries went out and purchased as many ‘corner saloons’ as they could; then they rented the saloon to a saloon keeper who sold only the owners-brewer’s beer.

They also supplied them with large lithographs of their brewery, tavern tables (they had pockets by each leg where the customer could place his beer while he played cards), tavern chairs with brewery logo pressed in the back, foam scrapers, etc.” 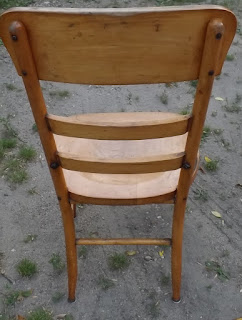 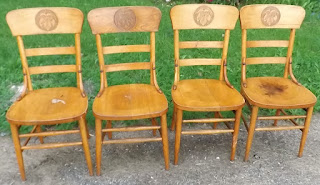 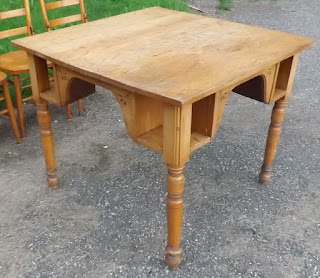 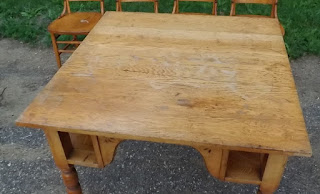 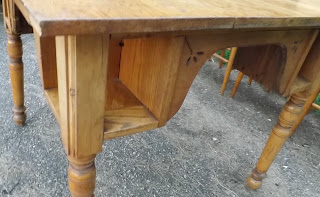 I was so proud of the saloon table and chairs that I decided to bring them to my space at the Annandale Flea Market (actually known as the Wright County Swappers Meet) for the July 4th market.  I knew the set would look great and bring shoppers into my area.  I didn't think that it would sell.  Well I was wrong. Adam and Tiffany, the same somewhat off beat couple who bought my Dairy Queen drive-up order sign, bought the brewery set too. Bought, hauled around Wright County and sold in 8 days. 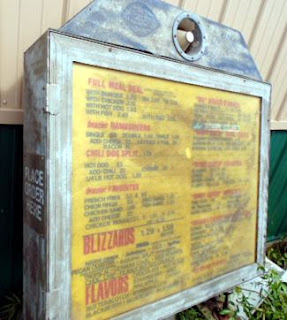 It was a very fine adventure,