This is a very interesting Victorian clock shelf that I picked up today.  I have never seen one decorated with a beaded skirt.  I think that it will make a great display shelf. 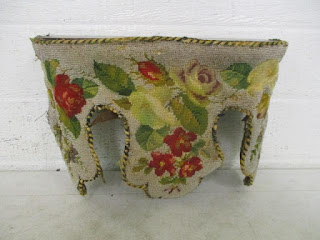 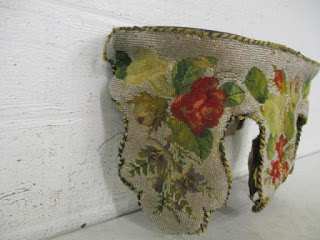 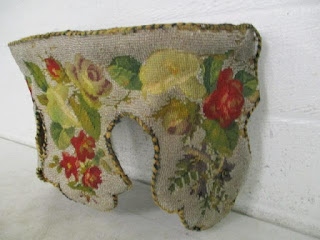 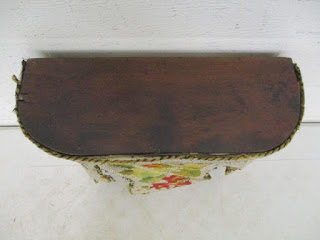 I have been contemplating a number of projects for the upcoming show season.  The snow on the tundra is still more than a foot deep, but cabin fever is starting to grip my psyche.  I was thumbing through the internet and found this photo of an old platform grain scale turned into a TV stand. 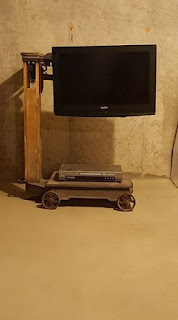 This hatched an idea.  I have a 1920's dental X-ray machine with the tube mounted on a cast iron articulating arm.  The arm extends, spins and at the tube mount tilts. 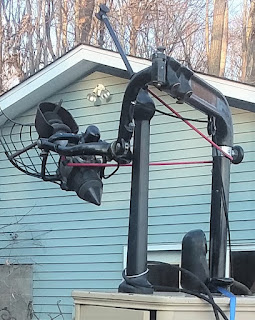 The arm is mounted on the right bottom corner of this photo and then folded and bungeed around itself.  The X-ray head, on the left side of the photo, will be dismounted at the pivot.  I think that I can modify a TV wall mount to fit the pivot.  I will then mount the arm on a heavy cart, table or fixed spot.  I think it will give a very industrial look.

Another idea is to gut the tube area and convert the arm to a desk lamp.  I have a cast metal lamp fixture with a 6" x 4" rectangular lens.  I can fit that on the arm and create a desk lamp that would operate kinda like a doctor's exam light. 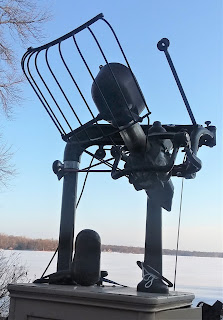 Either way it will be a contest to see if I can bring my thoughts to fruition.  Its only the middle of February and I already have Spring fever.

Two of the Coolest Items I Have 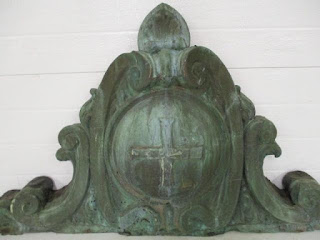 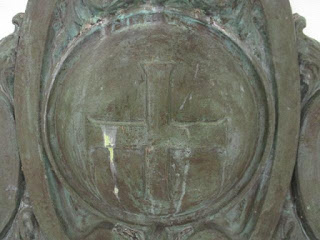 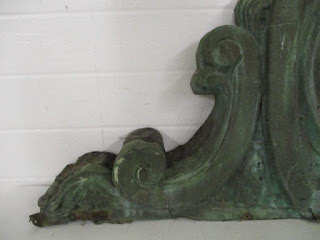 I bought 2 of these hammered copper building decoration at a local on-line auction.  They are 120-130 years old, 51" wide, 4 inches deep and 27" tall.  They were originally from the St. Benedict's Monastery in St. Joseph, Minnesota.  I am trying to decide whether to keep them or sell.

The Heavier the Better 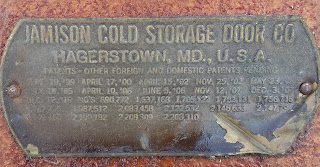 I thought that I'd give the old blog another spin around the net.  Mr. Flannery, your correspondent, has sorta migrated to Facebook, but I think I like the old blog format better. 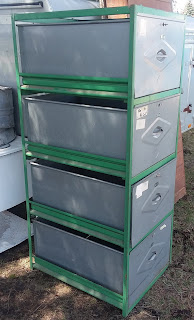 I have retired selling at any of the shops.  After more than 30 years, I decided that I didn't need that concentrated work anymore.  I have retreated to selling at a show or two and at the Wright County Swappers Meet (aka the Annandale Flea).  The flea is seasonal, only on Saturdays (except for the 3 summer holiday weekends), well trafficked and only 3-4 miles from my house.  I figure that once I make the minimal rent I am already up a couple hundred bucks because I didn't go to an auction on that Saturday.

I participated in a local online auction this week.  They were selling some of the fixtures from the old butcher shop.  I spent a little money and ended up buying some very heavy items.